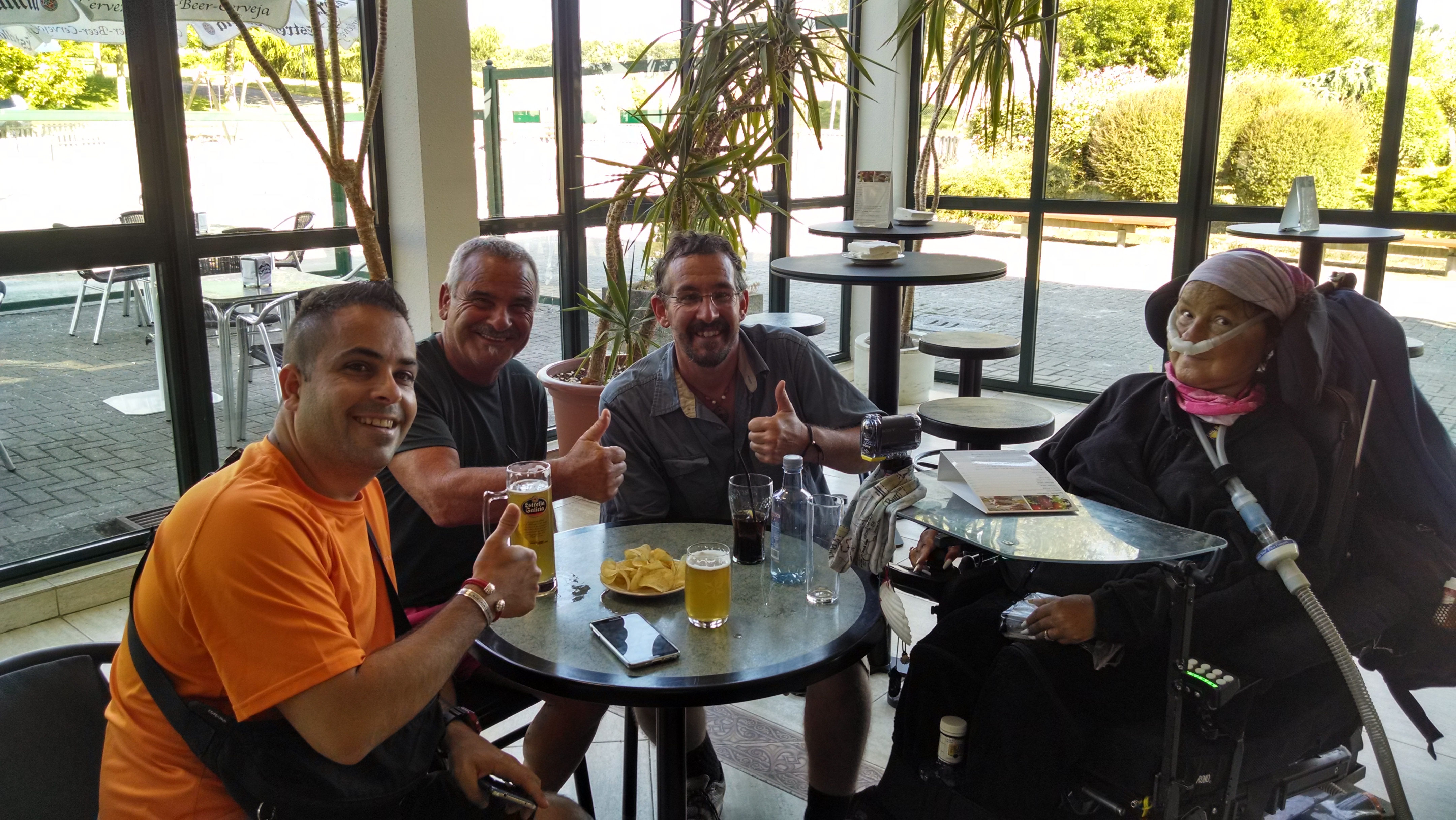 We are in Mont del Gozo, which means Mount Joy.  This was the spot where medieval pilgrims, if it wasn’t raining when they arrived, could first see the spires of the Cathedral in Santiago.  There was joy that the trip was completed, for them and for us.  Very much joy, but also a sense of sadness.  We have walked for so long, for so many kilometers, that we almost don’t want it to end.  While we miss our family and friends, we love the sense of togetherness that we get to experience here.  We walked almost the entire day without talking and it was fine.  Just walking beside each other on the path was so comfortable.  We were both lost in the thoughts of our Camino.  This was one of the first times we were not consciously keeping an eye on all of our surroundings to make sure we could make it.  We are more confident in the chair and our abilities to overcome obstacles in our path.

It is almost like we were dragging out the inevitable.  We stopped more, talked more to other pilgrims and sat at the cafes for longer than we ever had before.  Now that we have been exclusively on the path and not taking any of the roads, we meet so many more people.  And for  a talker like me that can take a ton of time.  Deb says I can talk to anybody at anytime and she is usually right.

At the first café we stopped at to have an orange juice and hot tea, speaking of orange juice, they have the best here in Spain.  When you go into a café, they have these machines with a feeder for oranges.  They put oranges in the wire chute at the top, the machine cuts them in half and squeezes the juice into a glass at the bottom.  The oranges are not that cold, but when it is this fresh it still tastes amazing.

Like I said when I write sometimes I jump all over the place.  Anyway at the first café, two people walk up and say hi.  It sometimes takes me a minute or two to place the faces of people on the Camino.  We are at a little bit of a disadvantage in that we are much easier to recognize.  It turns out it was Sergio and Marina the Italians from Albergue Verde in Hospital.  They were the two in the place where we got the vegetarian meal and massage and yoga.  She was very sick and running a fever.  They stayed there two or three nights.  She came up and gave us each a kiss.  They are so kind, and I really enjoy their company.  They are like us though and seem to be stalling to get to Santiago.

While we were there, Sergio said that the couple behind us was from America also, San Francisco.  We had just left Annie the day before and she was from there also, so I struck up a conversation.  He was a teacher also but not from where Annie was from.  We had a nice talk and Hayden finally took off without us.  I am sorry if I forgot your names but they both offered any help we needed on the path.  A push of the chair or a pull of the ramp.  Thank you guys and if you are reading this, drop us a message so we can connect when we get home.

We saw them several times on the path that day along with several others we had seen in the past few days.  A man from Ireland, Cork I believe we have seen several times passed us and we caught up with him in the next café where we were going to charge.  We invited him to eat with us and when he finished his wine he came in and had pork and potatoes with us while we charged.  Another pleasant conversation, we exchanged emails and he went on down the road.  He was a dentist and had to change his flight home for later that night, so he had to get to Santiago earlier than he wanted.  When we went to pay the bill, he had already paid, so once again the Camino provided.  While we were heading out another couple of people came in and started talking to me.  They were from Spain and they wanted to know all about Deb.  The man was walking to Finesterre also so we might be seeing him down the way.  While we walked out the door I found a five euro note on the ground, so my meal cost -5.00.  Things are great.

We took off walking and the path was fairly good.  We had a few rough spots but we have committed to walking as much of the Camino on the path these last several days as we could.  The road was next to the gravel and Deb walked there while I took the gravel but we walked side by side for several km.  This is where we were the quietest, lost in our own thoughts with no worries about the rough parts or the rocks.  The day was perfect in that respect.

We got a call from Hayden checking up on us to see how close we were.  He said the Mexicanos that we had met yesterday were all at the monument overlooking Mount Joy.  These were the first Mexicans we had seen and we loved them all.  They had an air about them that made them a joy to be around.  When we had first met them three of them had gathered around us and one turned out to be a priest.  The ones that spoke English which was most of them asked if he could give us a blessing.  We love it when people come to us like that, so of course.  He blessed us and then two by two and sometimes three, more and more came up to talk to us.  They were from a church in Guadalahara maybe.  Sometimes I get the towns mixed up also.  Guys and Gals if you are reading this, send me a message and I will correct it.

Anyway we saw them a couple more times on the way and they were always so loving and supportive.  Well Hayden said if we hurried we could catch them before they went on into Santiago.  Most of the people today are going on in.  Very few will stay just 4 km out of the final destination.  We came around the corner to the monument to Pope John Paul at the top of the hill and we decided we needed to go up to the top to see if we could see the spires of the cathedral.  We started up when 30 of the sweetest people we have met suddenly formed two lines and started clapping and cheering for Deb.  It always embarrasses her when this kind of stuff happens but I love it.  God bless you all.  Afterwards they all came to shake our hands, hug and kiss us and then they went to the little church to pray.  They had the priest and a nun from their church in Mexico with them.  We took a lot of pictures and I went in to say a prayer also.

I have found that the closer I get to Santiago, I feel an urge to go into the little churches whenever I find one open and give thanks to God for getting us this far and for his protection the rest of the way.  I am not Catholic but I love the reverence and the devotion that so many of them have.  I feel closer to God the closer I get to the end.  Someone said that the first third of the Camino is physical and it sure was.  The second third is mental on the Meseta, not as much for us because we couldn’t just walk and think.  But the last third is spiritual and man is it ever.  God has shown us to quit worrying about anything.  He takes care of it all.  How can you see His actions again and again without trusting in Him?  Every single time something didn’t work or we had a problem someone would come around the corner and precisely the right time with a solution.  If that is not God I don’t know what is.