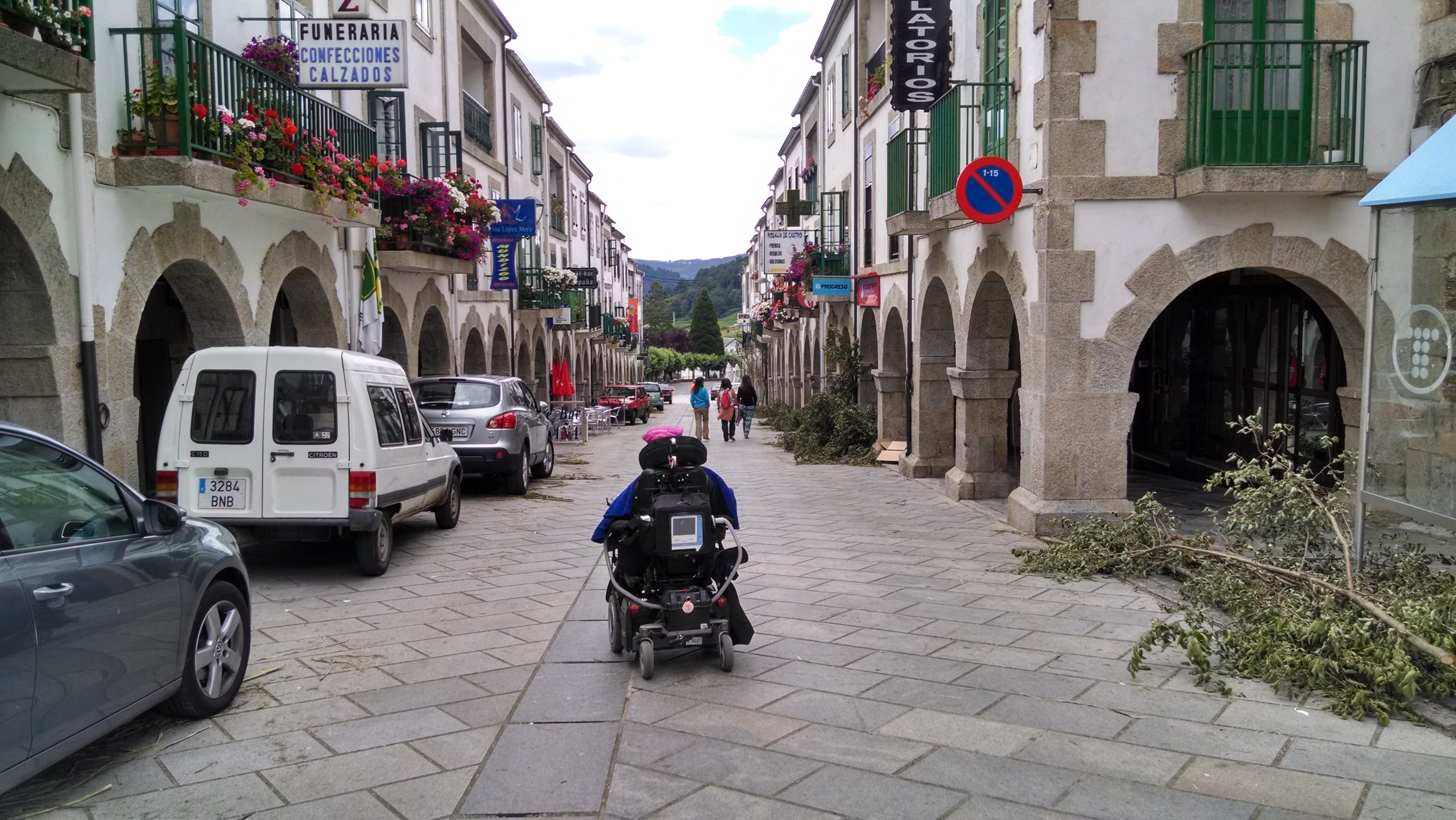 We didn’t wake up until after 8 this morning but we knew we only had a km or two to make our next stop.  After the day we had yesterday we needed a short day.  We got everything cleaned up at the house and headed into Portamarin.  There was a long bridge over the reservoir and we started up onto the sidewalk to go.  Shortly after the turn it got narrow and we had to unhook the trailer and go back to take the road.  No problem, as we got by the big sign at the first of the bridge we noticed that at the bottom were several names with check boxes by them.  Apparently someone had written every name of a group for them to check as they went over.  The 7th name was Quinn and his was checked.  Only two of the group were not checked and I remembered Quinn saying that one got hurt maybe and Morgan got called back to work.

Well we got over the bridge and there was a huge set of steps up.  I went up and got some pictures before we set off up the road.  There were two ways to go, one said Portamarin and the other Camino de Santiago.  We took the Camino but shortly figured I was wrong.  Just as we turned around three bikers pulled up and we started talking.  They didn’t know which way either.  The youngest of the three said he would go ahead and check it out.  Turns out we were right after all.

As we got up the hill there were three albergues, we started checking immediately, as we didn’t know how fast they would fill up.  The only one we could get into had 130 beds in a large auditorium.  When they heard Deb needed electricity when she slept, they said she could sleep in the large handicap bathroom?  That was weird and I didn’t get a good feeling about that one so off we went.  As we went on up the hill we saw our friend Maho from Japan and the two others she was traveling with.  She also knows Marianna and she said she was in the square hoping to find us.  We went to the square by the church but couldn’t find her so we looked for another place to sleep.  Most places we can’t get into, some are full, but in Galicia they have Xunta albergues, built by the government for the pilgrims.

110 beds but we had been in bigger.  There was a line with about 30 people already in front so I went looking for another.  When I got back, Marianna and Deb were in the line.  I also saw Omero, from Canada and his wife Perlita from the Philippines.  We have been seeing them since Burgos and I really enjoy them. When we got in, they acted like the wheelchair was no big deal and one of the ladies came out of the office with a key.  They unlocked a door by the office and there was a room with two sets of bunkbeds and a handicap bathroom.  All to ourselves, Perfect.

We called Hayden and he was walking with Steffen and another pilgrim, a girl from Germany I think.  Steffen started walking in Le Puy France and has been walking for about two and a half months.  He is friends with Marianna.  We figured if there was no place for them when they got to town, we could get them into our room with us.

When they finally got into town and they came to the Xunta with us the hospiteleros asked if they were friends of ours.  We said Hayden was our son and Steffen was an amigo, the girl had a reservation in another albergue, so they just put them in with us.

Today is Marianna’s birthday so we all got some food and celebrated with wine, soda, ham, and cheese and some type of cake we have seen all over the Camino but this was the first time I got to try it.  I really like it.  Good food and good friends.

We need to get two stamps each day until Santiago now but I always get two stamps or even three.  One at the place we stay a night.  One wherever we eat, another if I see a really cool looking one.  And several of the churches and cathedrals have their own stamp.  I really enjoy going into the churches, some are very fancy and others just a plain church.  Deb really likes the plain churches, like an old country church.  The one here is like that.  I always try to sit down and say a little prayer of thanksgiving to God for getting us this far.  When we went to get the stamp, people always want to know Deb’s story but since we don’t speak the language sometimes it is hard.  Today a guy was there and just started interpreting for us.  He was part of a group who started in Sarria and said he was very impressed with us, said I had a good heart.

It is after twelve and Deb is snoring, Steffen is talking in his sleep, Hayden just went to bed and I am beat.  Hopefully we will have wifi tomorrow and I can post some of these ramblings.