So much of our lives revolved around food, either cooking it, selling it, driving to other states to find it, or even making up recipes to try.  Deb has over thirty recipe books here at the house, another 70 now down at the store.  She would see one on sale at Hastings or at the library book sale and just couldn’t help it.  Quinn bought her the Pioneer woman book when he worked at Hastings and even got Ree Drummond to autograph it before he gave it to his mom for Christmas.  It is Debs favorite cookbook in her collection.  My favorite one was a cookbook I got in college, “101 ways to cook ramen noodles”.  We tried a number of them but several involved vegetables.

D used to make meatloaf every other week, and the boys and I liked that one a lot.  She would always make two loaves.  One with peppers and onions for her and Quinn, and a good one for Hayden and me without veggies.  Always with a ketchup sauce, not gravy, we weren’t animals.  She was a purist about that.  She loved meatloaf, while she could still eat hamburger without choking.  But whenever we went out to eat, if meatloaf was on the menu, her first question was gravy or ketchup?  Deb would say “I was raised proper, gravy is for mashed potatoes.”  We haven’t tried meatloaf yet either, it won’t be the same so I’m a little bit leery of trying to make it.

Another of her specialties was a roast beef stew thing, that was neither roast or stew.  I have tried to make this one and it never tastes exactly right.  Hayden com 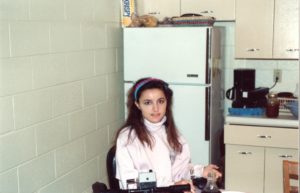 es close to this one.  He paid attention the year he worked for Deb at the bookstore.  His isn’t as good as hers but it is good.  She cared more about me when she made it though.  She would leave the carrots and onions large so I could get the flavor but still pick out the chunks.  Looking back on her cooking regimen sure shows how much that girl loved her man.  Every dish she made would have been easier if she was cooking for grownups.  But she was the virtuous woman in Proverbs, she will bring him good and not harm him all the days of his life, and carrots and onions could have brought me harm, Thanks babe.