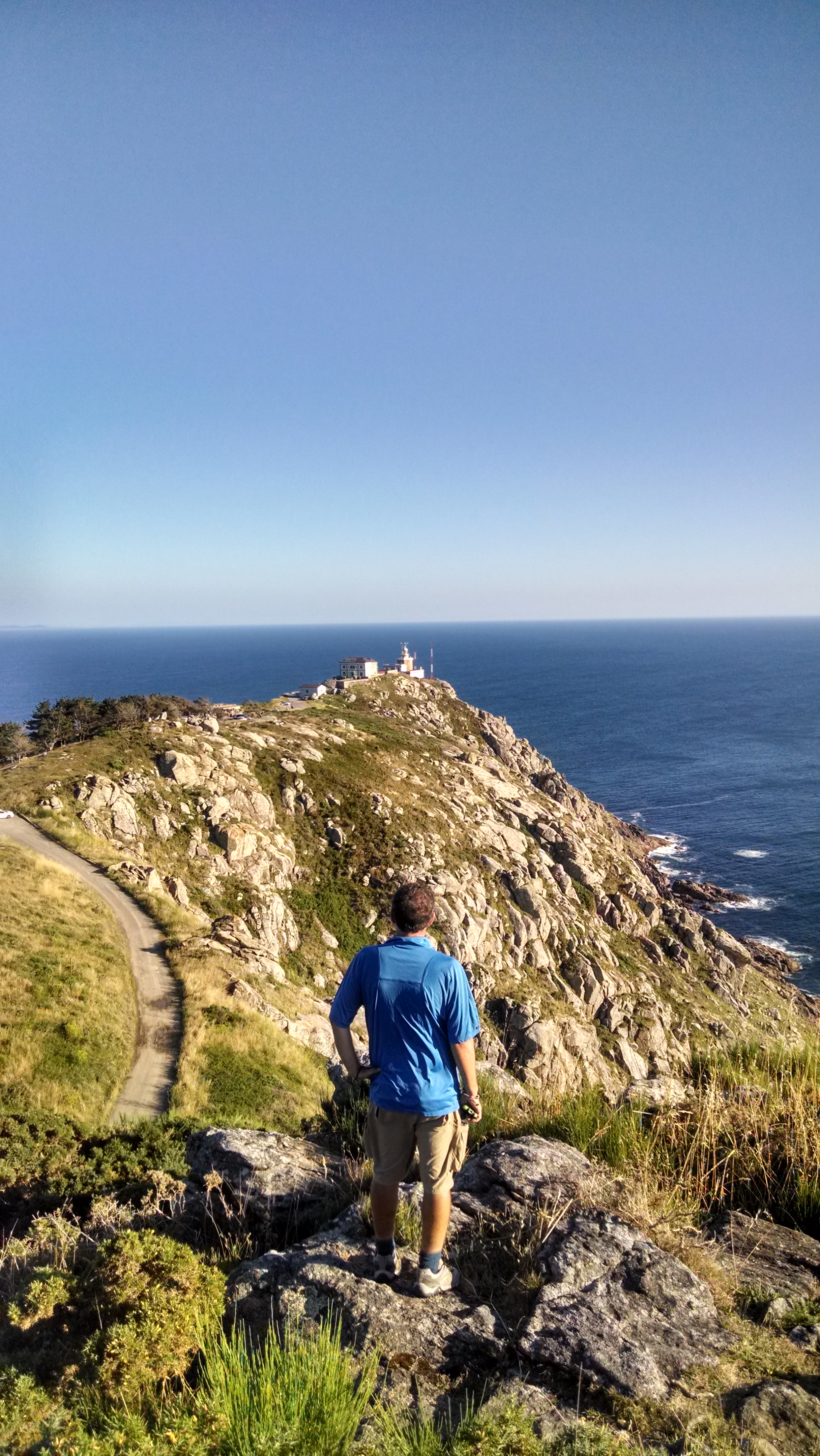 We made it to the end of the world.  It took us longer than just about anyone else and we had many detours and backtracks but she is finally here.  We walked out to the lighthouse on Cabo Fisterra, took many pictures and videos, it was as beautiful as everyone said it would be.  I felt more arriving here than I even did at Santiago.  Don’t get me wrong I loved Santiago but we are at the END OF THE WORLD.  My wife walked across an entire country to get here.  Not too bad for a girl who wasn’t supposed to live past the age of nine.  The strength she used and the bravery to even attempt this is unbelievable, for me and the boys people do this every day but for her wow.  I am so proud of her and happy that she even attempted this with me.  I couldn’t have come all this way without her.  Deb you are awesome.

We walked in on Saturday from the town of Cee.  When we got to Leon we spent an extra rest day there and I fell in love with the city.  It was one of my favorite of all time.  We spent much of the next days walking and talking about the future.  We have decided that we want to come back to Spain when I retire in 10 years and walk the Camino again.  By then we believe that they will have better technology, longer lasting batteries, and chairs that can go over larger rocks.  We will walk the entire way on the path.  We walked most of it this time there but there were several times we had to take the bike path and we are walkers not bikers.  Now I do love the bikers, some of them were the most giving and emotional of the entire Way.  So many of them would stop and come back up the hills to give Deb a hug or a kiss, to take a picture, or just tell her she was inspirational.  We have had grown men start to tear up talking to us.  Now that embarrasses her but I love that the European people are that way.  Their emotions are a huge part of them.  I don’t believe we would get quite the same reaction in America but what do I know.

Anyway we walked in on Saturday from Cee.  We were going to spend one more night there because it was a little rainy and Deb is not big on rain.  But the entire town was booked for the medieval festival going on that weekend.  Usually that is how we decide what we will do, walk or stay.  God just makes one way work and another not.  It is so much easier than trying to make decisions based on what we want.  Just let him decide it and it works out. Well we walked up the road and passed right into Corcubion the little town where the festival was, the Spaniards love a good festival.  Javier, the man who ran the albergue had told us he would be there dressed as a monk but he wouldn’t come until later that day.  There were little children everywhere dressed in period dress, many knights and maidens.  That just made Debs day, she loved seeing them walk around all dressed up.  Many of them just walk right up to her and look at her.  The innocence of little kids.

Well we ate some fair food, even in Spain they have fair food.  But we found no deep fried twinkies or candy bars and we were glad.  So far here they have avoided the pitfalls we seem to have fallen into in America.  The food is fresh and usually just off the farm.  I hope that we are all healthier after being here this long.  Several nights we have not had to give Deb any insulin and when we do it is only half.  Her diabetes is so much easier to manage eating non processed food.  I think I have lost several pounds as well.  No scales here so I don’t know but will find out when I return.  Hayden met a girl running a jewelry booth who really wanted to meet D so we walked over there.  She was what we would call in America a hippy chick but was really nice.  She was big into the chi and spiritual aspect of things, we see that a lot over here especially with the younger people.  Most of the elderly are hard core Catholics.  We even get the sign of the cross sometimes when we walk by some of the super elderly.

Well we walked on down the road and Hayden took several side paths but we almost always wound up at the crossroads together.  The last big one took Hayden down by the beach and us up on the road.  As we were walking the last stretch down to the view point, it was a car pull off where you could first see the Cape and the lighthouse in the distance if the weather was clear.  It was and we did, but we saw a big man standing on a picnic table taking a picture in the distance.  He looked familiar and when he saw us up the hill he came.  It was Ray the Tasmanian.  If you remember we first met him in the Cowboy bar a couple of weeks ago and have seen him several times since.  The last time was in Santiago where he was trying to track down his camera that he had sent through the post to his daughter in France, it never arrived.  It was so good to see him one last time.  He had arrived a couple of days before but it was pouring rain so he couldn’t see anything.  He said he just sat in a bar and laughed about it, it was so funny to him.  That evening he just took a bus back to Santiago, rented a car and drove back for the view.  The chances of him being at that view point just as we walked up were once again mind boggling.  That is the Camino Way.

We said our goodbyes and went down the road to the path.  My book once again said there was a paved path above the beach we could take, it has only been wrong about 50 times so we gave it a shot.  It turned out to be a flat rock path which are pretty rough on the chair but we had already come this far so off we went.  When we got to the beach we met a lady and her daughter from Belgium who had walked the Camino together.  Very nice people and she teared up at Deb’s accomplishment, she told us that if we ever go to Belgium we have an albergue at her house.  I love these people over here.  So giving and loving.  We gave her our website and exchanged pictures.  When I get back to America where I have internet I will post all the pictures of the people we met and hopefully they will get in touch with us with their emails and information.  I so want to know where these people went next and what they did.  Like Johanna and Anders the Swedes who went to the Camino Norte and have kept in touch with us via facebook.  Love you guys.  So anyone who is reading this who we met along the way PLEASE comment and send me your information.  Some I have written in my books that I will go through as soon as I get home but some I failed to write and I would love to hear from you all.  I will contact you with our adventures if you wish.  We don’t know where we are going next but it will be epic.

We also met a couple from Australia who were kind of waiting for us.  They had heard of Deb on the Way and were hoping they would see her before they left.  We saw them the next day getting on a boat to see the sunset at the lighthouse from the water.  Awesome.  So nice to meet you guys too.  Please send us a message.  We finally made it into town and started looking for a place to sleep, that is usually our first priority when we get somewhere.  Most of the places had stairs again here but we found one that would have put us in a room with 20 other beds.  We were feeling a little like a private room so we looked a little further and I found a casa rural with a phone number.  I called it and she said she would be there in cinco minutos.  I waited and a woman showed me a private room for 30 euros, not too bad,  when Hayden came though the price went to 40 but okay.  I try not to complain about things here but the shower was one of the worst, very little hot and no pressure.  When the lady checked us in I didn’t feel like she even wanted us there.  I should have left then but we were already in.  It was one where the hospelereo was not on site which doesn’t bother us.

We walked to the little market around the corner and saw Steffan and Emma coming back to an albergue around the corner.  We talked for a little bit and they went to do laundry also.  We went back and ate at the Casa and did our laundry.  The washer took almost 3 hours to wash and there is so much humidity here that the clothes were still wet the next morning.  I screwed up and had washed everything I had except a pair of shorts, we hadn’t washed in a few days.  There is not much worse than having to put on wet underwear in the morning.  We left the next morning and found a better place for the next couple of days.  The Pension Finistellae.  They had a room up the street in another building that was perfect for us, it was 45 euros but it had 4 beds, tv, private bath and laundry.  We hung our clothes out and they dried quickly in the sun before we walked to the lighthouse.

Will write my last post from Finnestere tonight when we return from the sunset watch at the cape.